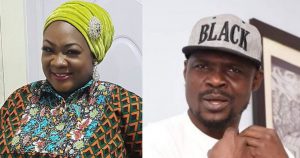 Nollywood actress and comedian, Princess has opened up on how some people attempted to kill her over her public stance on the sexual assault case involving her colleague, Baba Ijesha.

Media personality, Chude Jideonwo, who shared the video on his social media pages, said he had placed an embargo on releasing it because Princess spoke freely at the time and it might prejudice the case.

Princess, in the interview, said she regretted speaking about the rape cases after two to three weeks because people placed a bounty on her head.

The actress said some people had tried to kill her and she had to cut off some people she respected so much after discovering they were the ones pushing Baba Ijesha.

According to Princess, the rape case affected her so much that she went numb for days and didn’t know where she was until her landlord came looking for her.

She said: “Now I don’t regret it, but the first two, three weeks, I did because they put a bounty on my head, they tried to kill and then some people that I respected so much, I caught off because I found out that they were the once even pushing him.

“I was numb for days, I didn’t know where I was, I think it was my landlord who came to look for me. You were in my house because you came for me for help and that was when I was sick, then I was just recovering from ectopic and I was not receiving visitors at all.

“I remember asking my mom to stay away because I couldn’t work or do anything by myself, so when I became better so I said everybody should rest. The first thing he said to me when he came to my house sounded stupid but when he first said it, and if not for the gravity of what he had done it would have been easy for me to just overlook it, he said Princess you are my benefactor, you know I have been going through a lot, and I have never had anyone in my corner except you. I can’t believe I have done this evil against you I’m sorry.”

The post ‘They Tried To Kill Me’ – Princess Speaks On Threats Over Baba Ijesha Rape Saga appeared first on Information Nigeria.