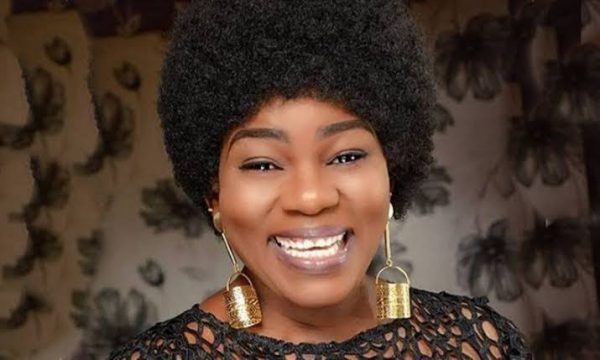 Nigerians on social media have reacted to the death of popular Nollywood actress, Ada Ameh

A source who spoke with The Nation on condition of anonymity said, Ameh died in Warri, Delta State around 11 pm on Sunday.

According to reports, the Nollywood actress was a guest of an oil company toyshop when she suddenly collapsed.

A further report had it that Ameh was rushed to the Nigerian National Petroleum Corporation’s hospital but passed on before they arrived at the facility.

The colleagues of the actress on Monday had been trooping the facility to see her remains.

This is coming weeks after Ameh opened up about battling depression and losing seven members of her family to death.

Following the news of her death, a lot of Nigerians have taken to various social media to express shock over the sudden death of the actress.

Below are some reactions culled by this publication.

@therealdaddymo1 wrote; ”This is terrible news about the death of Ada Ameh. She lost her only daughter not quite 2 years ago and I can’t even begin to imagine the pain, the depression and the sorrow she has been doing through. She needed a lot of support and help.”

@chiikodiie wrote; ‘‘Ada Ameh never recovered from the depression due to her daughter’s untimely death. Rest in power Emu”

@Drmuzoic wrote; ‘‘How can you say Ada Ameh is dead? She just posted on IG yesterday showing herself in a good place. This is so sad”

@kaylayechi wrote; ”I learnt ada ameh is dead. This woman went through a whole lot of trauma when she lost her only child. May her gentle soul RIP”

@Tony_Ogbuagu wrote; ‘‘Just yesterday while watching the Johnsons my friend raised a concern about her looks and I remembered she lost her only daughter sometime last year, it must have been very difficult for her to move on, Rest In Peace Ada Ameh.”