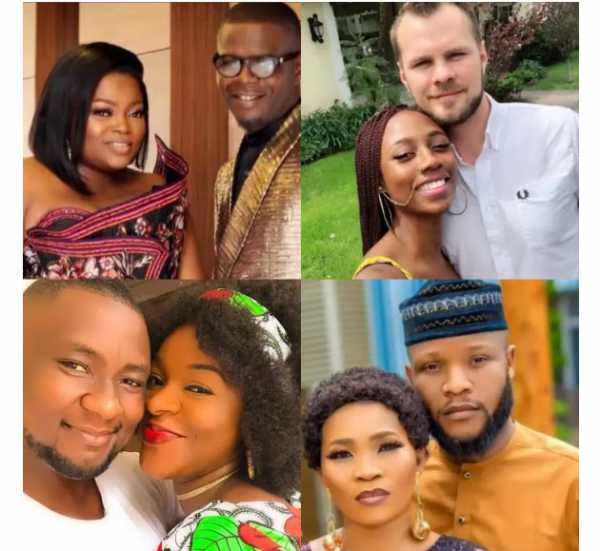 Below are some Nigerian celebrities who have parted ways with their partner in 2022.

Funke Akindele, popularly known as Jenifa is a Nigerian film actress and producer. On May 26, 2012, Funke married Otunba Adeola Kehinde Oloyede, a union which crashed in 2013 due to a difference of opinions, lack of agreement, and also because of her lack of fertility at that period.

The actress later married Nigerian rapper Abdulrasheed Bello a.k.a JJC Skillz in London in May 2016, a marriage that produced twin boys in December 2018.

On the 30th of June 2022 rapper, JJC Skillz announced to his friends and families on his Instagram account that his marriage with the award-winning actress had come to an end.

Although the reason for separation is still unknown, a few weeks back, JJC Skillz son from another lady, Benito, claimed that there was trouble in Bello’s household as he made accusations of infidelity in the home.

In June 2022, Cha Cha via her Instagram page announced the end of her marriage, the actress shared a cryptic post in which she mentioned that her life is at risk, she wrote;  “Leave now Alive, or Leave a Corpse.” This post created lots of reactions from her fans, most people wondering if she had been a victim of domestic violence.

Meanwhile, Austin Faani cleared the air in a post explaining that he has never laid his hands on Cha Cha Eke or any woman.

Nigerian actress and filmmaker, Yewande Adekoya’s marriage also hit the rocks. In 2013, the Nollywood actress married Abiodun Ishola Thomas, a union that has been blessed with two kids.

In April 2022, the mother of two announced the end of her marriage, due to the infidelity on the part of her husband and several counts of emotional abuse.

According to Yewande, she had been a victim of emotional abuse for 14 years, long before they were married, she further explained that Ishola Thomas has never treated her right. The actress further claimed that she had always been begging him to show her love. Also, she explained that she had always been the financial backbone of the family, which she never complained about.

Nevertheless, Yewande Adekoya asserted that she still loves Ishola Thomas despite his bad attitude to her.

In 2018, Korra Obidi married an American doctor and sports therapist Dr Justin Dean, a marriage that produced two daughters but lasted for 4 years.

Their marriage crashed a few days after they welcomed their second child, a development that shocked many of their fans on social media.

Dean announced on his social media accounts that he was done with the marriage reasons which he blamed on infidelity, narcissism, and lack of accountability, he further explained that he needed to protect his mental health. Dr Jean Dustin also claimed that his estranged wife was a cheat.

Korra Obidi also accused her ex-husband of cheating as she shared a video of Justin Dean with a lady which he took on a trip to Brazil.